60 Years of Leifheit: How “Made in Germany” Works 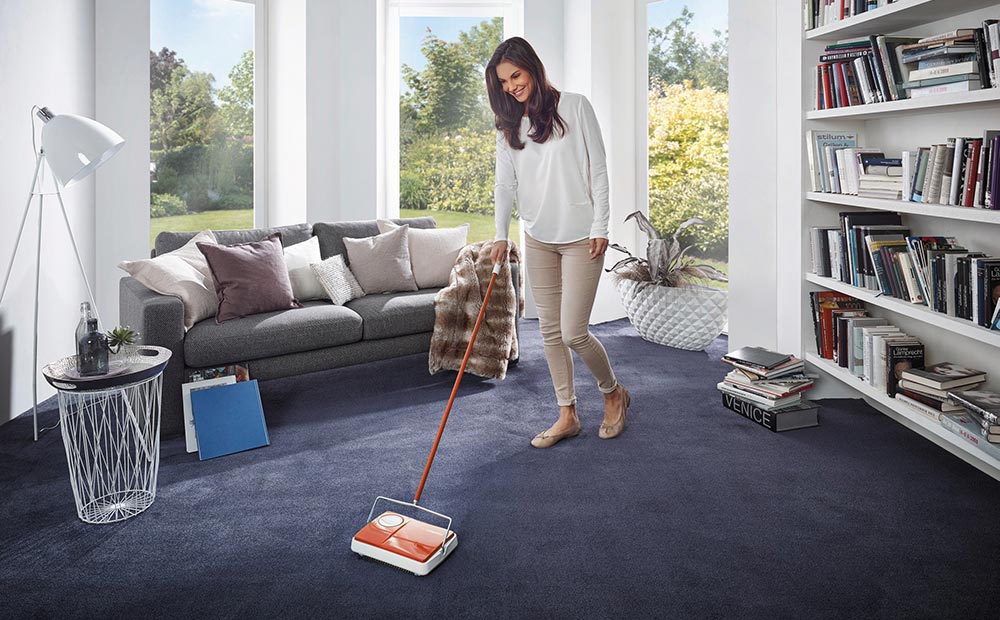 In Nassau, Germany, 05/11/2018 German industrial designers like Richard Sapper, Dieter Rams and Hans Erich Slany had made history. Since then, their ideas have had a major impact on products from companies like Siemens, Braun and Leifheit, and which have gone on to achieve worldwide recognition. Many major achievements owe their existence to forward-thinking entrepreneurs having a creative mind on their sides, whom they could completely trust and whose ideas they implemented with the utmost precision. Hans Erich Slany, a professor of engineering, was one of these creative minds. Together with Günter Leifheit, he developed products that significantly simplified household work for people. Only 60 years ago, he developed the Leifheit “Regulus” carpet sweeper. Since then, millions have been sold and the model is still part of the Leifheit product range today. At the same time, Slany ushered in an age of countless development and design projects which have continued to flow forth from the house of Leifheit, even after his active time with the company ended.

A demonstrator presented and explained the device. By the end of day one, the demonstrator had already sold 100 units. After that, the success of the Leifheit Regulus was no longer in doubt. Within a decade, Leifheit would produce two million carpet sweepers, making it Europe’s market leader.

The Regulus carpet sweeper was followed by the Telegant, the first wall-mounted drying rack. It showcased the idea that racks like the Telegant could be “elegantly” folded in and out. This innovation provided plenty of room for drying clothes, even in homes with limited space. With the support of industrial designer Hans Erich Slany, many other innovations were introduced, including the Perle, a table top hand-sweeping set, and the Sooger sponge mop for cleaning floors. For his achievements, Slany was named in 1996 as one of the world’s ten best industrial designers by the renowned North Rhine-Westphalia Design Centre, which even topped the ranks at that time.

To this day, Slany remains one of the most highly regarded figures in the world of industrial design. In the words of Dr. Peter Zec (61), head of the North Rhine-Westphalia Design Centre and initiator of the Red Dot Awards, one of the most renowned industrial design prizes: “Hans Erich Slany was one of West Germany’s most influential industrial designers and has had a major impact on shaping our everyday lives. For decades, the products he designed have been a fixture in households everywhere. The close collaboration between his design studio and companies like Leifheit were crucial to this success.” Dr. Zec goes on to say, “Together, Leifheit and Slany introduced iconic products to the market, starting with their famous carpet sweeper. Products from the Slany era are impressive for their usability and functionality, as well as their special attention to ergonomics.”

Yet, even after the company founder and his “designer in chief” parted ways at the end of the 1970s, the wave of innovation at Leifheit continued. The founder had planted the seed of ideas in his development department and from then, the company was practically bursting with new products. Leifheit’s reputation as a pioneer in the field of research and development is clear from the company’s collection of more than 400 registered patents. The Presto floor wiper (1984) and mop (1987) established Leifheit’s outstanding position in the field of floor care.

Next came the Profi floor wiper (1993) with its 360° swivel joint, making it especially flexible in use, and was then shortly followed by the mop press (1997). The highpoint finally came with Leifheit’s still unbeaten Twist System, which prevents moisture damage on sensitive floors during cleaning and works with playful simplicity. With this innovation, Leifheit practically revolutionised floor cleaning. In 2012, Leifheit integrated its patented spin handle into the twist system, along with a new “brake”. This clearly set the product apart from other manufacturers’ foot-operated systems, once again proving the technological prowess of Leifheit’s in-house development department in Nassau.

In 1973, Leifheit brought the first rotary dryer onto the market. Once again, the company followed the principle that “German engineering-art combined with attractive design should enable the absolute best product on the market for the consumer’s needs.” Leifheit’s rotary dryer was easier to open and close, not to mention exceptionally light to carry. The innovative rotary dryer led to another “eureka” moment: gone were the days in which clotheslines needed to be labour-intensively cleaned by hand before hanging laundry. Leifheit’s original, patented automatically retractable line instantly guaranteed “dirt free” lines. The constant development of this product, another important factor for Leifheit’s success, turned the company into a clear leader in the market for rotary dryers. Since the introduction of the Linomatic Deluxe, Leifheit has one of the most successful products on the market.

Recipe for Success: Housekeeping Made Easy!

During its 60 years of product development, Leifheit has never lost sight of the wishes and needs of consumers, a continual focal point for the company’s engineers and designers. There are numerous practical examples of this. In the past, German housewives still ironed on heavy ironing boards which often needed to be carried up from the basement for use. Leifheit developed an ironing board that made use of “feather-light” material. The Air Board M Compact Plus weighs only 3.8 kilograms, making it the world’s lightest ironing board. This makes it so easy to fold up or set down.

Leifheit has also been a pioneer in the kitchen. The design and functionality of Leifheit’s signature Columbus insulating jug is another crowning achievement of German engineering art, “made by Leifheit”. Thanks to its shape, the jug was lovingly referred to by the company’s employees as “Columbus’s egg”. It was the first insulating jug that featured an aroma button, which was also a patented Leifheit invention. After the patent expired, Leifheit’s jug design was duplicated by many competitors. Today, it still sets the standard for what constitutes a good insulating jug. Like the Linomatic rotary dryer, the Columbus is still produced at the company’s headquarters in Nassau, Germany.

Leifheit proves that good design is timeless and functional. Household products are designed according to their intended purpose, guaranteeing simple, ergonomic use. “Our main reasons for using colours have nothing to do with decoration. At Leifheit, colours serve to explain the product”, says Leifheit Product Designer Sylvia Weber. “Leifheit uses colour to distinguish operating elements from the rest of the product, so the product is self-explanatory”, adds Product Designer Christian Sambale.

Surfaces for the products are chosen based on their purpose. For example, Leifheit always uses textural surfaces whenever household products need to be slip-resistant and easy to hold. With products that need to be easily cleaned, smooth, highly glossy surfaces are used. Generally, Leifheit products feature a subdued visual design, making them an understated addition to any modern home. Current examples of the company’s consistent design aesthetic are its new innovations released onto the market in 2018. These include the battery-operated Regulus PowerVac 2in1 vacuum cleaner and the Clean Tenso steam cleaner.

The key features to Leifheit’s 60 years of ‘“Made in Germany” quality’ are simple and functional products that are easy to use and offer multiple benefits to consumers.